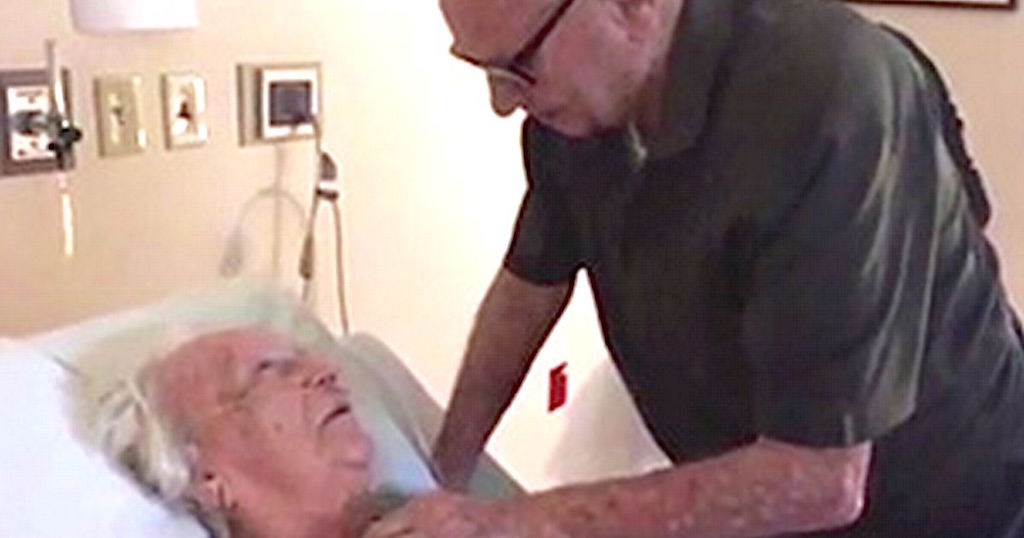 TLDR This was the song my grandmother would sing when my grandfather went away to fight in World War II. It has been their love song ever since. She is 93, he is 92, and they have been married for 73 years! Now he is the one singing to her as she prepares to go away. My grandparents Laura and Howard have been married 73 years. In this video Howard is 92 and Laura is 93. Laura (Grandma) is at a hospice facility making peace with her final days. I was lucky enough to capture this precious, heart-melting moment between the two of them. Howard (Grandpa) is singing to her their love song, the song that comforted her when he went away to fight in World War II. At family gatherings, it was not uncommon for the two of them to sing this song together, each taking a verse and serenading the other. In fact, after fifty years of marriage, they renewed their vows and performed this song as a duet for the entire family at the reception. Sadly, Grandma is now too weak to sing, but that doesn’t stop her from saying the words to him (see at 1:00). Howard then takes over for her and sings the rest of the song to her while stroking her face.Moments before this video began, when Grandma heard that Grandpa was in the room, she asked if she could hold him. Grandpa cannot stand on his own, but he immediately pulled his wheelchair close to her bed ready to make it happen. My cousin, Serena, who is a physical therapist, helped him to his feet and held him up throughout the entire song.You might notice above her bed there is a sign that says, “Patient Blind.” That is because she has macular degeneration, so she cannot see much of anything but shadows and light. That doesn’t stop her from looking deep into her love’s eyes. Grandpa, on the other hand, has lost most of his hearing, so you’ll notice us repeating things for him since Grandma is to weak to raise her voice.The song used in the video is “You’ll Never Know” performed by Rosemary Clooney with Harry James. Our family prefers this version because everyone always said Grandma had a voice just like Rosemary Clooney.After posting this video to Facebook, it began to go viral and all the outpouring of love lifted everyone’s spirits… including Grandma’s! Hospice eventually deemed her well enough to go back home to live out her remaining few days. As of this posting my beautiful Grandma Laura Virginia is still with us resting peacefully at home. Our family along with the wonderful people from hospice are taking care of her and making sure she remains as pain-free and comfortable as possible while she prepares for her nearing departure. We all thank you so much for the love and kind words.In case you don’t catch it, I think the sweetest moment of all is at 1:00 –Laura: You outta know, for haven’t I told you— (Lyrics to the song)Howard: (Singing. Finishing the line for her) —Sooooo a million or more times…UPDATEHere is the link for the youtube video. The youtube video has a few subtitles to help you understand what grandma is saying.https://youtu.be/wWPOG_hxkTE